A fine scarce example with short hyphen reverse, officially impressed to "J.LAWSON, 14th FOOT". Minor old pawnbroker's marks to rim. Pte. James Lawson appears on the original 14th roll as a member of Captain Hall's Company entitled to single clasp Bhurtpoor.. Copy of his entry on the roll included. At the storming of Bhurtpore (29th December, 1825), the 14th, commanded by Mathias Everard, led one of the assault columns, and although unsupported cleared the breach after the premature explosion of a mine, and joined up with the other column led by the 59th Foot. Lord Combermere noted that the steadiness and discipline of these two regiments decided "the fate of the day". 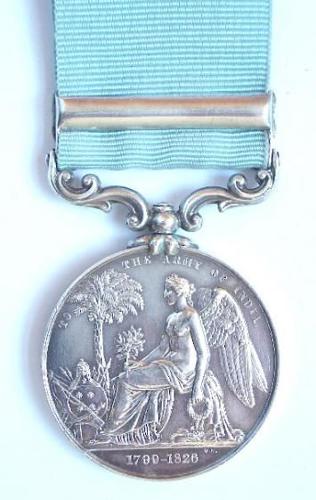